I’m just a Union man, you know,
although what I know may often show
a certain existential flow
that resonates an afterglow
to left and right, above, below,
in front, behind, to friend and foe
as understanding where to go
when words are heard, like the sound of "Oh!"
Say, can you see an average Joe
who looks like me; from "Bal-ti-mo";
who'd write in verse, but isn't Poe,
or any other poet?  So, ...
I say, and may repeat,
this laborious little feat,
considered a consequence
of dropping dimes like 50s, since
that's simply all I can afford,
and like as not will reuse, restored
beyond as they’re now presented here
in present form, within this sphere
of ignominious influence
where matters are, presently, dense
as lead. What's said and done
reveals content that is pure fun-
damental form pertaining to
retaining formal function.  You
can say it now of little feat -
a noun and adjective complete
as they describe one man and all
to those whose feats aren't seen as small
at all by those with whom compared.
This little feat that you've just shared
combines, compounds, raises the bet,
between you, reader, and poet,
like songs on little feat dot net,
where what you hear is what you get.
Exploring who I am, and not,
reveals, in fact, that all I've got
is what you see, and may elicit
from me. Labor Omnia Vincit.

So, Marriage is a Union, Man.
“Man” means YOU. A HUman can,
“Woo - sue for the affection of
another human”. So Woo, Man! Love
simply shows that you know and care,
no matter who else may sit and stare
queerly, that you clearly understand
things like this, and its demand.
Were you a “Coward”, like Noël,
who would you dare to ask, or tell? 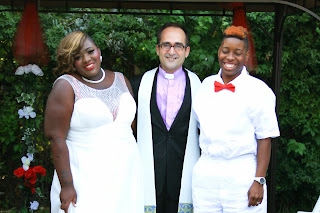